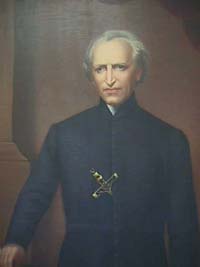 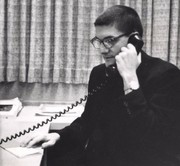 Students frequently ask questions about Holy Cross of San Antonio or about the Brothers.  Most of their questions are about something current.  For example, they might ask about a movie or today’s game or do I know their relative who graduated from Holy Cross.  Seldom do their questions require historical annotation. But alumni and other adults most often ask questions that are properly answered in a historical context.  Such questions are, “Who started Holy Cross High School?”  Or, “Why did they locate Holy Cross on N. San Felipe Street?”  At times I have the impression that they are asking in the most polite and respectful words they can muster while in reality they cannot imagine a reasonable answer.  In 1957 when Holy Cross first opened its doors, many people were probably asking the same or similar questions.  If so, then there must be some reasonable answers.  A response is in order.

Analogously, when a popular fast food restaurant such as McDonald’s or Burger King opens in the mall, people do not ask why they chose that mall location.  Any comments are usually those of approval.  For example, they will comment that “it’s a good location,” meaning that they will have lots of business.  They see this as a wise, sensible business move.

So when people ask “Why did Holy Cross locate on N. San Felipe Street?” there must be a bit of doubt or suspicion in their minds.  Did the founders know what they were doing?  Was it a wise decision?  After all, resorts locate along beautiful beaches and not in Iceland.  Ski lodges locate in the mountains and not in Florida or Cancun.  Cattle ranchers don’t buy property on Broadway.  The familiar first step for success in business is, “location, location, location!”

Success is not always determined by doing what has always been done in the past.  Henry Ford broke with “tradition” and he was successful.  Rather than build a few cars for a select group of people, Henry Ford was determined to build a simple, reliable car that most Americans could afford.  Sam Walton started by locating in smaller populated areas, selling discount merchandise and with more customer availability before expanding to compete with the “big boys.”

Although Father Basile Moreau is recognized as the founder of the Congregation of Holy Cross, the Holy Cross Brothers must give founding tribute to both Father James Dujarié and Father Basile Moreau.  Fortunately, both were very strong, apostolic men.  They are founders needing no apologies.

There can be no doubt that for Fathers Dujarié and Moreau education coupled with spiritual formation was a priority.  Using today’s terminology, they were educators in the faith.  Although it is no longer the late eighteenth century and Holy Cross boundaries far exceed the country of France, the world human condition is ripe with the same evils.  Any mission lacking the intensity and conviction of these founders betrays their spirit and action.

In 1795, Jacques Dujarié was a newly ordained priest of the diocese of Ruillé, France. His ordination came at a troubling time. The French Revolution brought the risk of martyrdom, driving religious to abandon their ministries or risk death. Father Dujarié’s passion for service brought him strength and courage. A secret religious life was organized in barns, lofts, cellars and caves, recalling the lives of the first Christians.

During the Revolution, Father Dujarié would secretly exercise his ministry in the parish of Ruillé and its surroundings. He walked long distances at night in bad weather and on bad roads to console the sick, administer the Sacraments and baptize the children. He was seen to go barefoot in the snow and sleep on straw – moved with great zeal by love and penance.

In addition to his service to the poor and sick, Father Dujarié wanted to reach out and educate students in the faith. But he could not do it alone. Soon he brought together collaborators in his vision – dedicated men and women who were committed to a life of service. The men were called the Brothers of St. Joseph and the women the Sisters of Providence of Ruillé. For almost twenty years, Father Dujarié and his collaborators were able to bring hope and inspiration to his community.

On May 19, 1803, the General Council of Ruillé-sur-Loir proclaimed: Whereas the said M. Dujarié, in addition to the religious functions which he provides regularly, is devoting himself zealously and carefully to teaching school to young boys and helping them free of charge to learn how to read and write, which is an advantage for this commune; whereas Father Dujarié goes to help the unfortunate as much as his means will allow, and there is every reason to believe that he will make good use of whatever provision is made for him.

In his own words, “I (Father Dujarié) am a priest to be the consolation of the widow, the father of the orphan, the support of the poor, and the friend of those who suffer.”

There was probably a touch of rigorism in his moral theology, but likewise frequently repeated exhortations to universal charity and pity for the unfortunate.  All this finds expression in the personality of the Cure of Ruillé and in his whole comportment.

Fr. Moreau grew up in the midst of the turmoil of the French Revolution. As his parents were devout Catholics involved in the underground Church, the aspect of the Revolution which most affected him was the suppression of the Church.

Indeed, restoration of the Church was the principal theme and work of Father Moreau's life. As most of the pastors and teachers in France before the Revolution were priests and religious who were forced into exile, by the 1820’s most of the nation was ill-catechized and illiterate and without the benefit of the sacraments. As a young priest and throughout his life, Basile was an effective preacher who preached parish missions and offered the sacraments on an itinerant basis to rekindle the neglected faith in towns and villages throughout the region.

Due to Father Dujarié’s age and failing health, it was agreed that Father Moreau would assume responsibility and direction for the Brothers of St. Joseph and Sisters of Providence of Ruillé.  Along with the Salvatorists of Holy Cross that had been organized by Father Moreau, they were united as the Association of Holy Cross which later was to become the Congregation of Holy Cross.  This was in 1835. The Congregation was named Holy Cross (Sainte-Croix) after the area of Le Mans, France in which it was founded.

Although the Congregation of Holy Cross did not receive official approbation from Rome until 1857, already Holy Cross religious were being assigned to foreign missions.  In 1840 Holy Cross missionaries were sent to Algeria; in 1841 to the United States; and in 1853 to Bengal.

For Father Moreau, Christian education was a work of resurrection and an option for the future.  The direction of the Brothers and the defense of schools were to be among his greatest concerns.  He expressed it, “As the French superior of a teaching body, it is my duty to do all that is in my power to contribute to the good education of youth and thus contribute to the well-being of my country.” He never hesitated to lock horns with the authorities when they overstepped their rights. And he could be quite tenacious!

Nevertheless, true to his evangelical spirit, Father Moreau never forgot “service to the poor.”  The purpose of the Congregation of the Priests and Brothers, as stated in the first Constitution, was: …the instruction and education of youth, with a particular care for poor and abandoned children….”

Following in the tradition, spirit and zeal of Father James Dujarié and Father Basile Moreau, their successors are the men who founded Holy Cross High School in 1957.

Stay tuned for Part two, “Why did they locate on N. San Felipe St?”