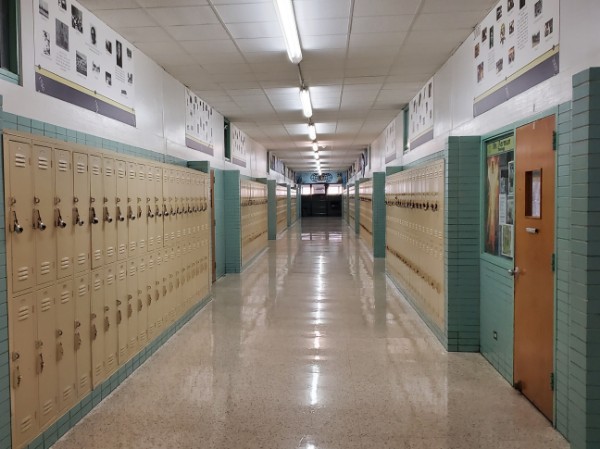 Brother Rene once told us during a sophomore Biology class, “Never let a teacher or a book get in the way of your education.”  At the time, this wisdom was wasted on a room full of confused 16-year-olds who had spent most of their education adhering to the strictures of uncompromising nuns, religious brothers, priests, and good old-fashioned parents.  The idea that there was an education that could be gleaned outside of religious doctrines, scientific formulas, mathematical equations, historical analyses, or the plain “Because I said so…” from our moms and pops was way too much for our goofy minds to grasp. Besides, we had Rod Stewart telling us that “Tonight’s The Night” and who had time to decipher wisdom when rudimentary lust was so much clearer?!  Now, however, as those uninitiated sophomores approach more than 40 years since that quote, we simply have to look at the time we spent with some of our Holy Cross educators to arrive at Brother Rene’s perspective.

As I reflect, there were two people who crossed my path at Holy Cross who went beyond the normalcy of a classroom and who impacted me greatly.  One was Brother Daniel Durig.  Somehow Brother Daniel, whose calling was more suited for food service, found himself having to teach a sophomore Theology class.  And it came to pass that some students in that class would sometimes take advantage of Brother’s genteel and relaxed teaching style.  One day, having been a part of that group who indeed took advantage, Brother asked me to see him after school.  It was during that meeting that Brother explained to me that our actions sometimes give a false reading of who we truly are.  Brother told me that he knew I had a good heart and that I was a person who should know that respect isn’t something that one could put on and take off like a hat.  Respect is an expectation and those who don’t know its proper use hurt themselves more than the people that they keep it from.

Coach Burke Reed was another person who helped create a path.  He was a person who lived his life so genuinely and confidently that anyone who got to know him understood what a true role model was.  A military man who had served his country, he later turned his life’s work toward influencing the lives of young people by the way he lived his.  He commanded respect because he was consistently fair and because he always took the time to explain and listen.  As for his influence on me, I’ve never forgotten the day that I was in what passed as a weight room in the old gym. (For clarity, at one time the weight room was next to the spiral staircase which was inside next to the smelly single stall restroom that didn’t lock so you had to hold it shut with a football belt while you did your business…ah, good times.)  Anyway, one day as my sophomore body struggled to conquer what I’m sure was fairly minimal weight on the bench press, Roland Saenz ’78 asked Coach Reed what he thought of the “rookie” lineman who had his hands full trying to keep up.  Coach Reed said, “He’s going to be a good one.”  I guess it’s left to interpretation if Coach Reed’s words were prophetic, but what is clear is that those words instilled in me an expectation that hard work would always be a part of success, and if Coach Reed thought that I had it in me then why not?

My two personal examples are just glimpses of the many we still see today.  Even now in the midst of a pandemic, our teachers and administrators have not skipped a beat in their effort to give our students the necessary tools so that they continue to prepare for college, as is the case for our seniors, or for the opportunity to matriculate to the next level, as is the case for our middle school and our underclassmen.  Countless of on-line hours grading assignments and tweaking lessons, of creating opportunities for success instead of failure, of just plain caring and working hard have planted the seeds that one day might help our kids see what a true Holy Cross education is.  Like Brother Daniel who took the time to talk to me after school and say the things that he felt I needed to understand, or coach Reed who had to have known that him believing in me and then letting me know it would light a spark that might someday create true light, our teachers continue this wonderful tradition of going beyond the lessons of the classroom to bring our kids the lessons of the heart.

Brother Rene would be proud.